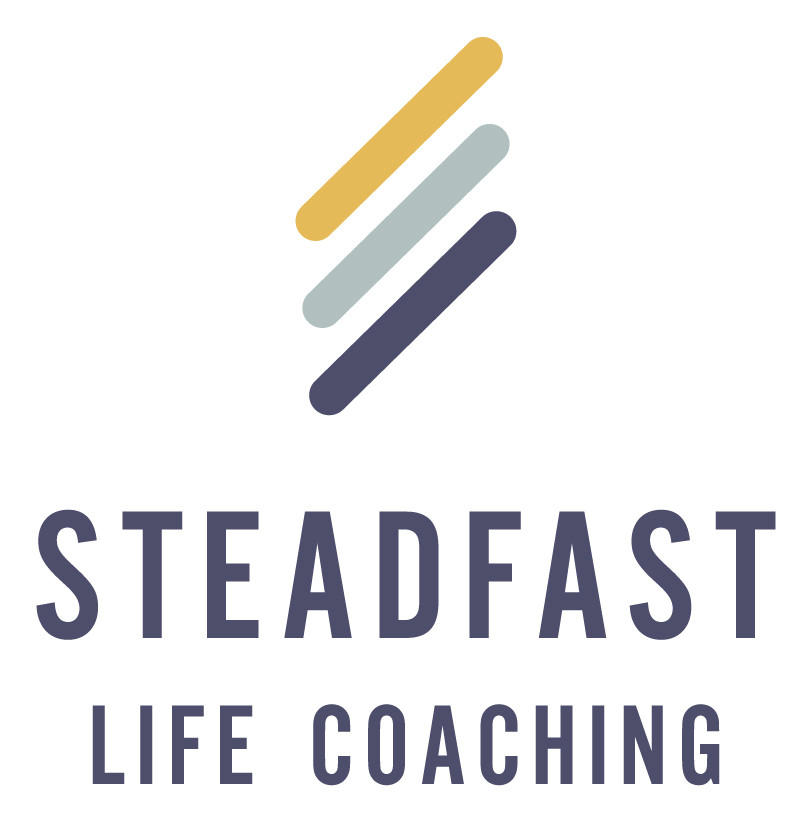 Episode #41 How to Think Powerfully 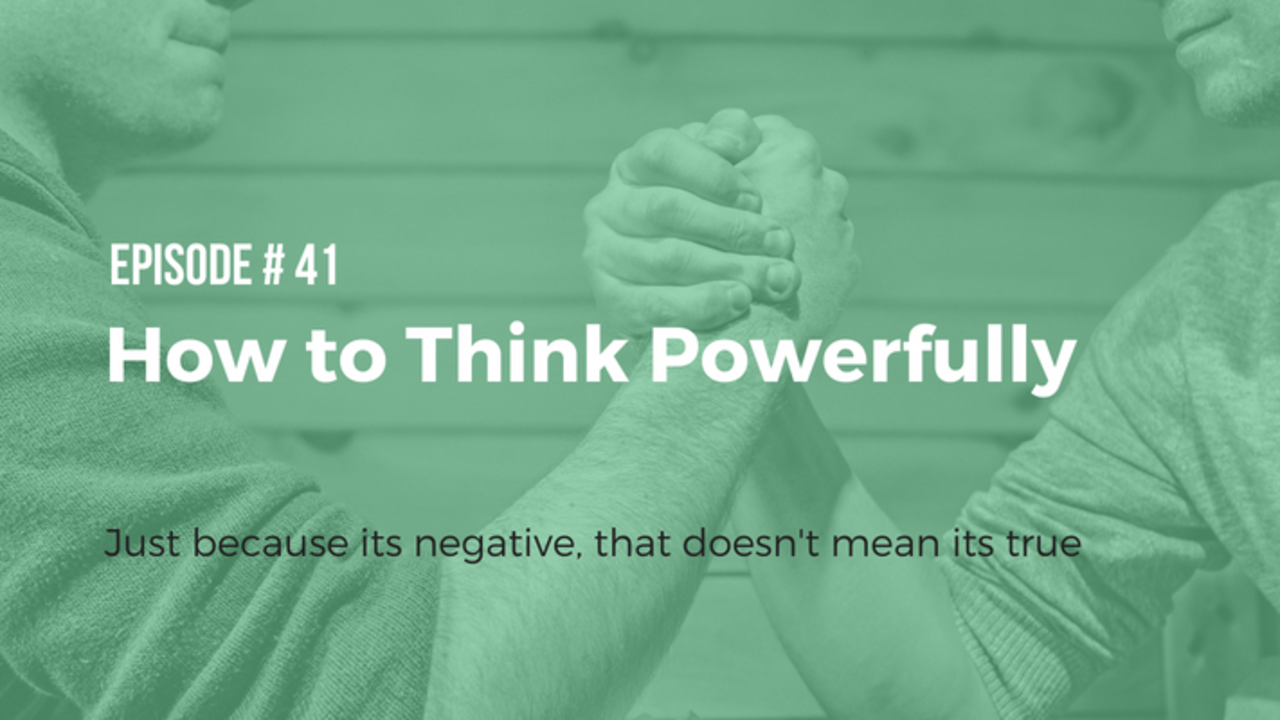 You're at the head of the class and you notice 3 students near the back fighting to hold back smiles.  They're not breaking any rules ...but they are clearly attempting to hide something.  Your mind starts spinning.  Is my zipper down, is there food on my face?

...Or maybe they are excited because they are already realizing that this is going to be the most fun class they've had all day.

Which one is most likely?

(He checks his zipper) ...MUST be food on my face

I have a generally positive thought pattern and it leads to a fair amount of helpful self-talk.  When this shows up in tough life circumstance -...

Episode #40 Become a Fanatical Fan of YOURSELF 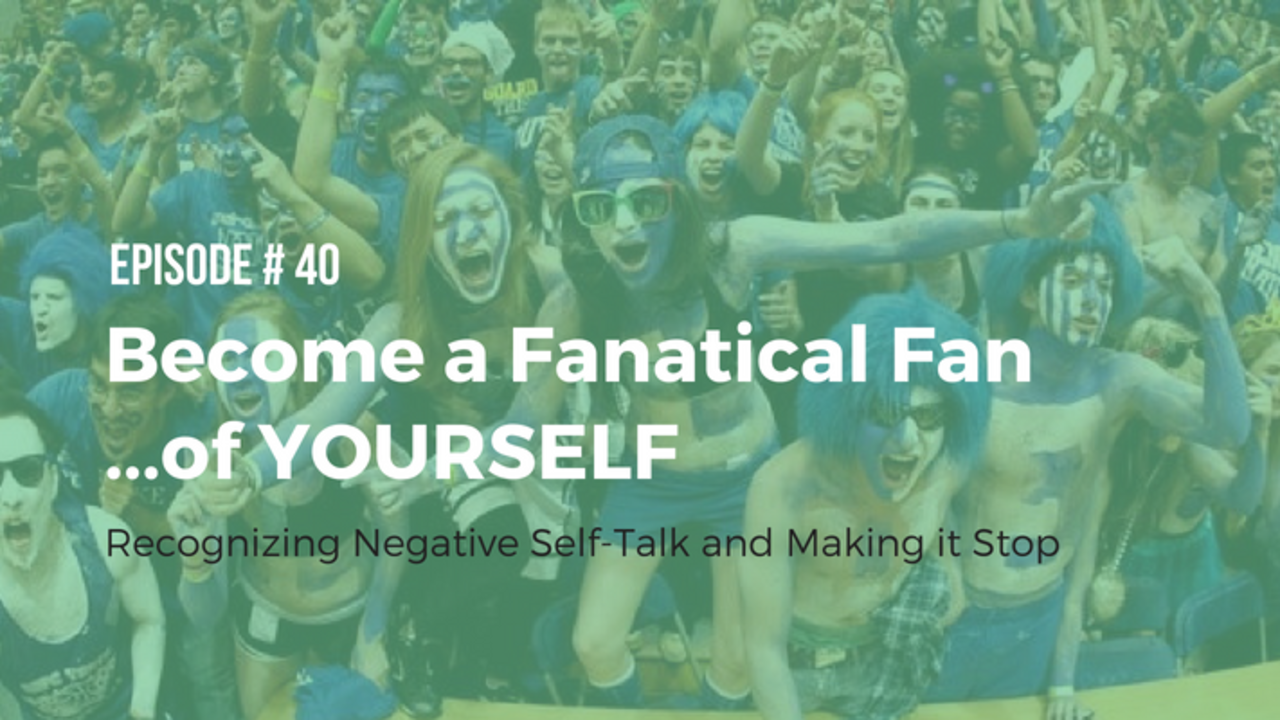 I've played in a lot of sporting events both home and away.  I've felt the difference between support and heckling.  As a 5-9 inch volleyball player, the wasn't one away game I played where I didn't hear some variation of, "Hey number 7, the NCAA agreed to a new rule this year, you're allowed to stand up!!!"

Now, of course, you learn to not only survive, but thrive in that environment, but a "home court advantage" is discussed for a reason - it's just easier to show up under pressure when you're being supported vs verbally attacked.

Since we KNOW this is true and we WANT to show up well in our own lives, we always support ourselves ...right?  Of course not, that would make too much sense.  Instead, we obsess on our shortcomings, live in fear of failure, doubt ourselves, then chastise ourselves mercilessly when let ourselves down. 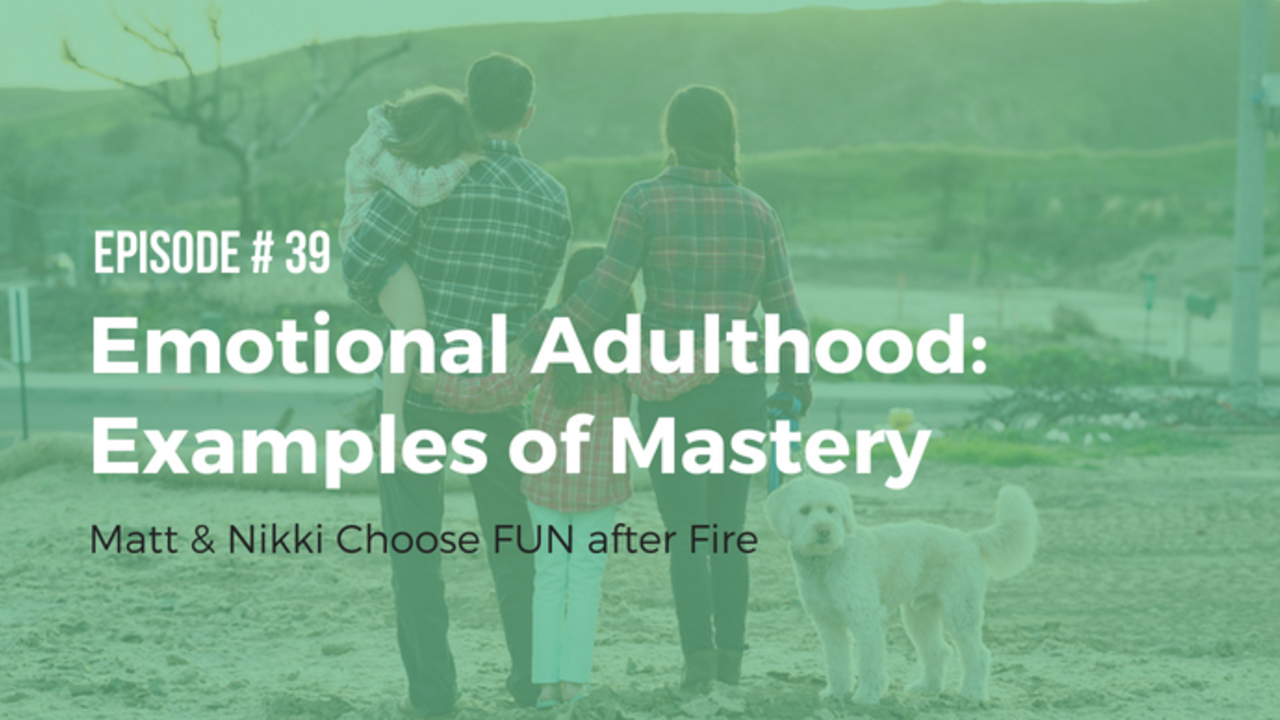 What if one of your worst nightmares became an actual event in your life story?  Imagine that you hear about a fire within 50 miles of your house - you're a positive person, so you decide to keep a cool head and be responsible.  You make the choice to evacuate ...just to be safe, or maybe a good example to your neighbors.  Maybe you could even make it an "adventure" as you pack up your kids and head to a friends house for a sleep over.  A bunch of smiles, laughs, and "don't worry, it will be OK's." 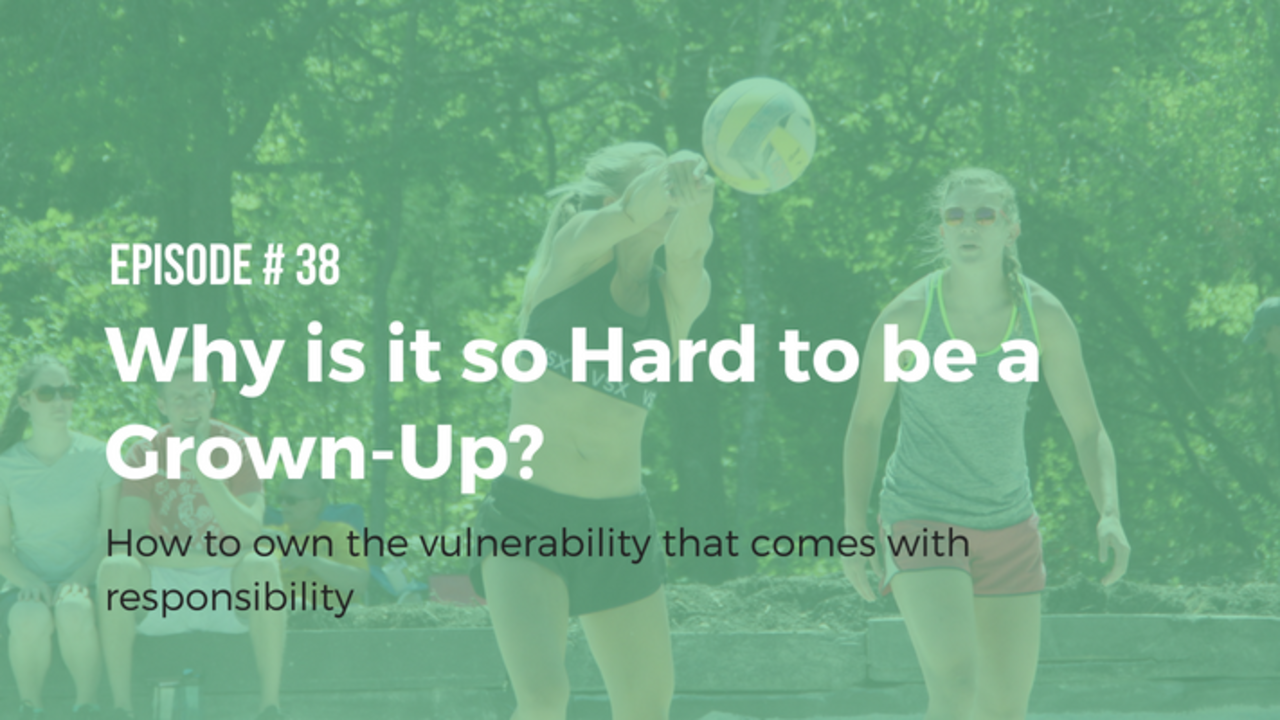 Have you ever played sports with an injury?  It's a vulnerable spot to be in.  There are very real limitations to how you'll be able to perform, so you're faced with a choice:

Compete, or don't compete ...or compete, but blame your shortcomings on your injury.

If you choose to compete as an emotional adult, you risk being judged, you risk people assessing your ability, people measuring your value ...all based on a performance below your potential.  That's scary!!  It can also be empowering and freeing.  You will be forced to show up for YOU.  Forced to remember it's not about THEM - that it is OK for people to be wrong about you.  Forced to check in on the source of your value, the foundation of your self-worth.  Is it in winning?  Is it in your friends' opinions of you?  Or does...

Episode #37 Why would I WANT to be responsible? 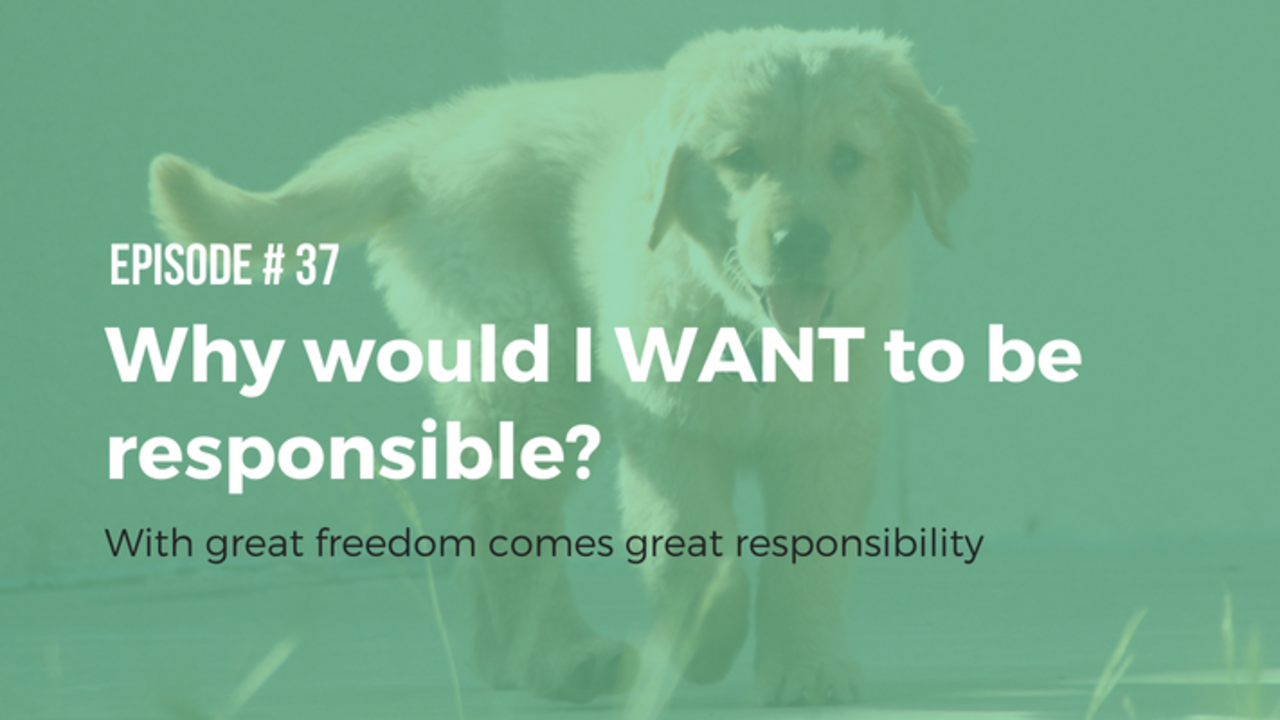 "Holding on to anger is like grasping a hot coal with the intent of throwing it at someone else; you are the one who gets burned."

Why would I want to take responsibility when the OTHER person is in the wrong?  Basically there are three reasons that get unpacked in this podcast.

1.  I'm only hurting myself

2.  I can't change what happened no matter how mad I get

3.  I'm giving away my freedom

Why can some athletes make a bad play, shake it off and come right back on the next one when others stew, fume, and sulk about it so they make 4 more errors on their next 4 opportunities ...EMOTIONAL...

Episode #36 You're Never the Victim

Our life is filled with events - and those events determine our experience ...or DO they???  Jack Canfield says that our experience is actually the SUM of our life's events PLUS our response.  That's a big deal it means that we have a say over our own experience of life.  Viktor Frankl goes one step further to say,

"In a position of utter desolation, when a man cannot express himself in positive action, when his only achievement may consist in enduring his sufferings in the right way - an honorable way - in such a position man can, through loving contemplation of the image he carries of his beloved, achieve fulfillment."

The bottom line is that we respond to each event of our life with maturity, or with immaturity ...or more bluntly as an "Emotional Adult" or an "Emotional Child".  The more time we spend in emotional adulthood, the more fulfilling our experience of life.  As with many things, the first step toward choosing on purpose is recognition.

Episode #35 You're Allowed to LOVE 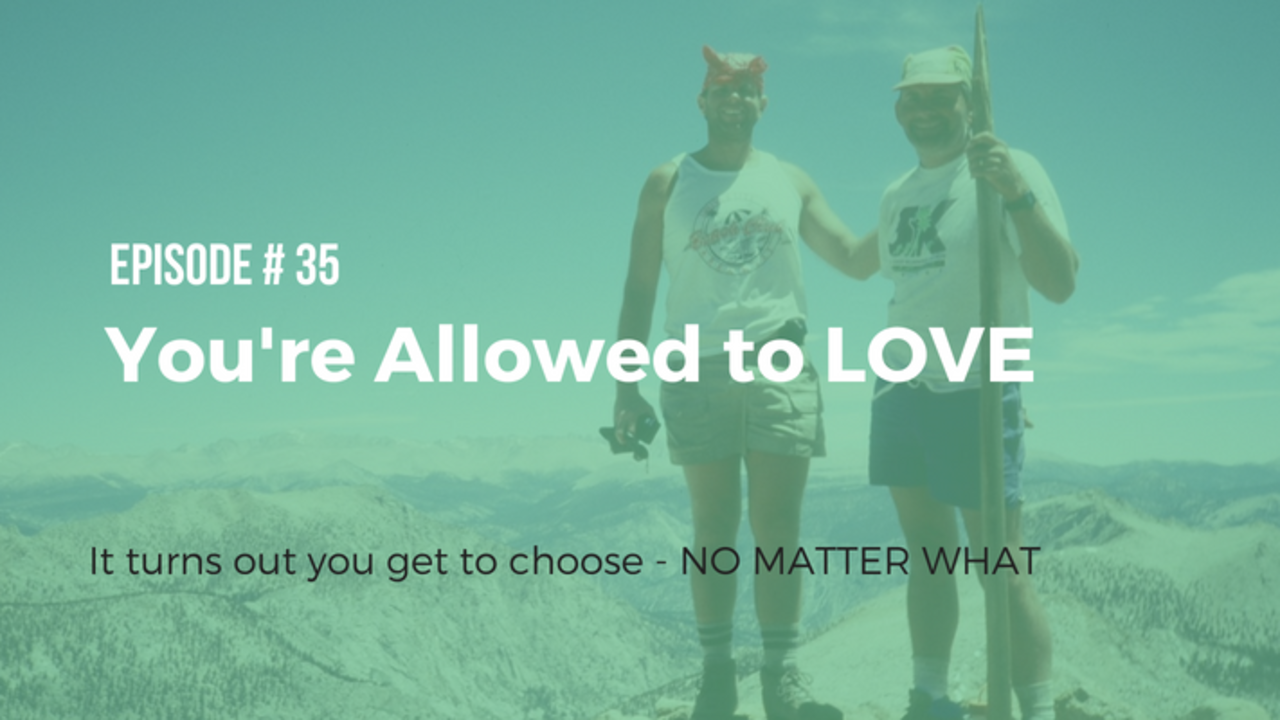 Have you ever been in a situation where you simply decide to show kindness ...even though the odds are against any chance you would have received it if the tables were turned?  Those moments are powerful reminders that kindness, thoughtfulness, and love are not really about actions being earned or deserved - they are about a choice we are making about how to show up in life.

Remember the end of Wonder Woman when she resists her rage and chooses love ...or The Return of the Jedi when Luke won't give in to the Dark Side.  Even though deep down we all kind of wanted to see him kill them both!!  These scenes are examples that we have a choice ...and that anger doesn't win the day.

Gandhi, Mother Theresa, Martin Luther King Jr, Jesus - these are all people who chose respect, kindness, and love over anger, hate, and violence ...and they ACTUALLY made a difference.  When I watch the movie of their life, there's this part of me that wants them to lash out, I want to see... 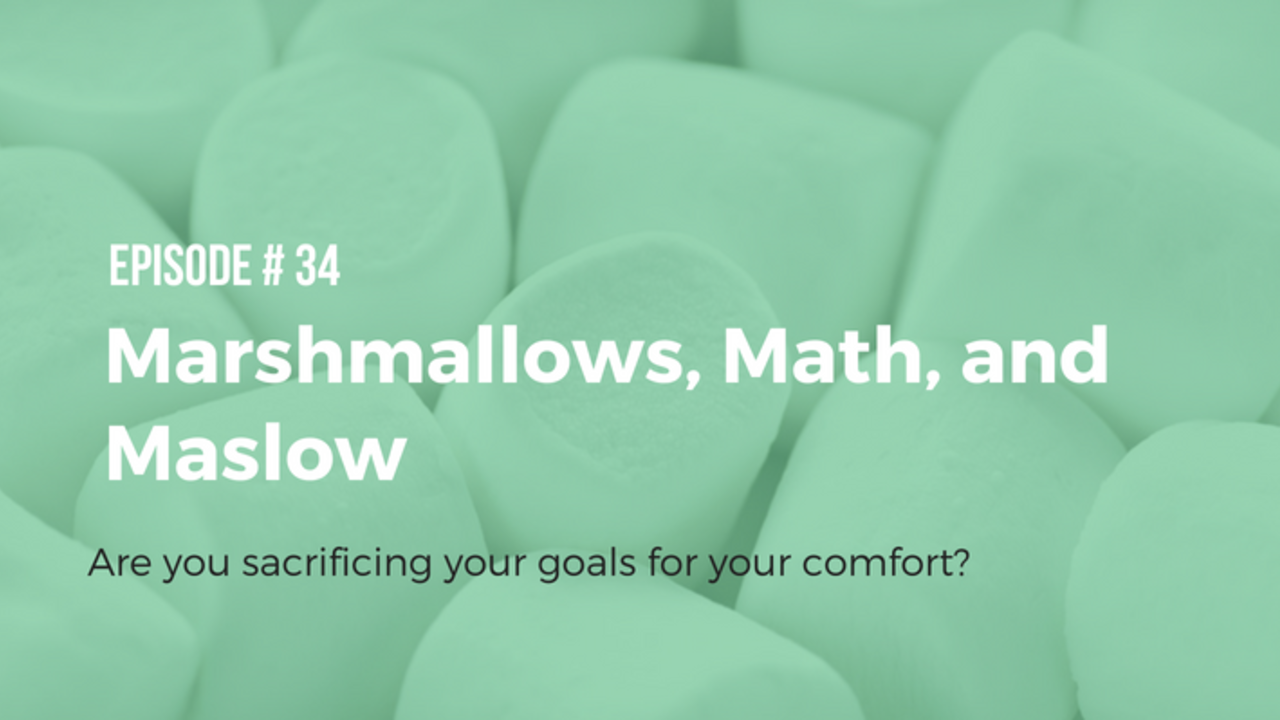 I like to drink Dr Pepper, but sometimes I choose not to.  Why is that?  Well for starters, if I choose to hydrate instead of drink Dr Pepper, I have less shoulder pain, I have less knee pain, I get to workout without so much pain, so I workout more often.  I have workout options like trail running, volleyball, and SUP available to me, so I am more excited about getting exercise, and I stay more successful at reaching my goals like winning volleyball games, competing at a high level in tournaments, having Whitney's back when we play together, climbing mountains, and exploring the creeks and rivers of Central Texas.

Episode #33 When you Hike, don't Forget to Trip 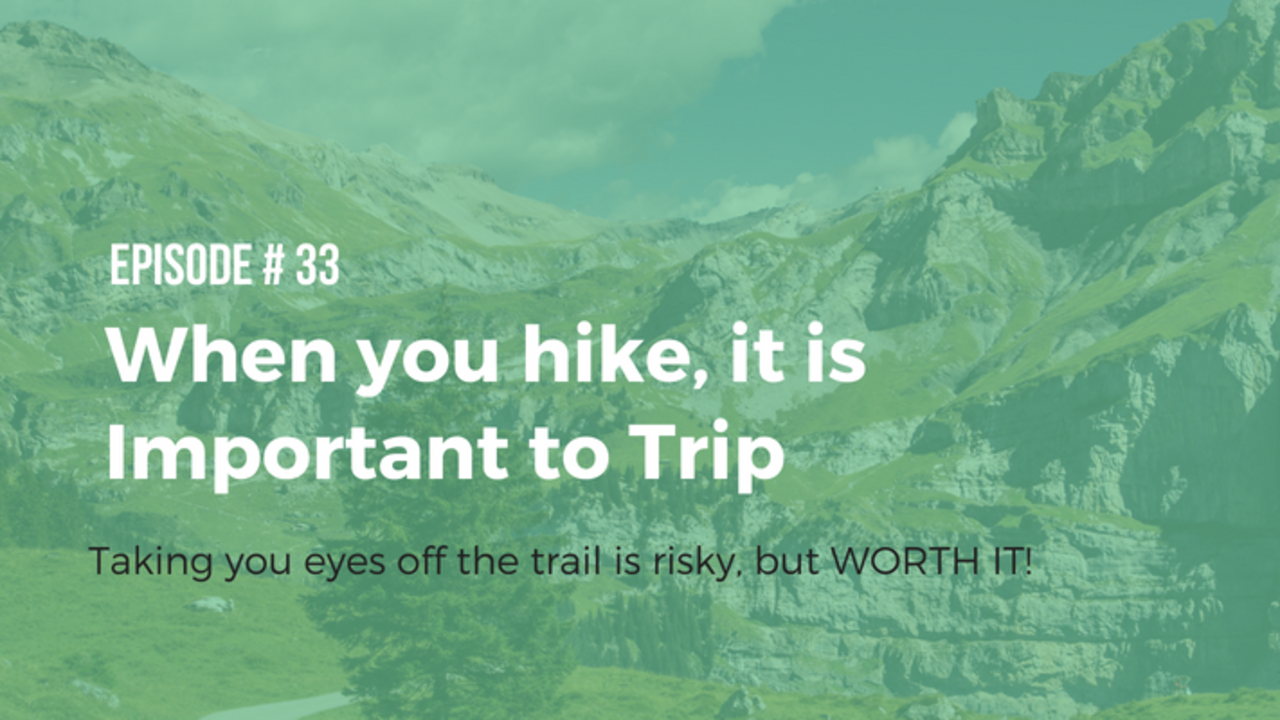 Whitney and my "getting to know you" phase included A LOT of hiking.  I liked this because it's one of the areas of life that the deck is stacked in my favor :)  As I was hiking along one day, doing my best to seem manly and fearless - yet compassionate, Whitney just started laughing.  I wasn't sure why, so I asked.  "You trip soooo much when you hike!!"  Well, that was not EXACTLY the impression I was looking to make, but it made me smile nonetheless.

Years back I discovered that there were two kind of hikers - trippers and trail watchers.  I learned a tough lesson about the dangers of being a trail watcher.  Hiking with your head down and looking only a few feet in front of you may seem like the responsible way to do it, but there are three big problems.

3. You miss out on the most important part ...the world you're walking through.

As it seems is often the case, hiking lessons make... 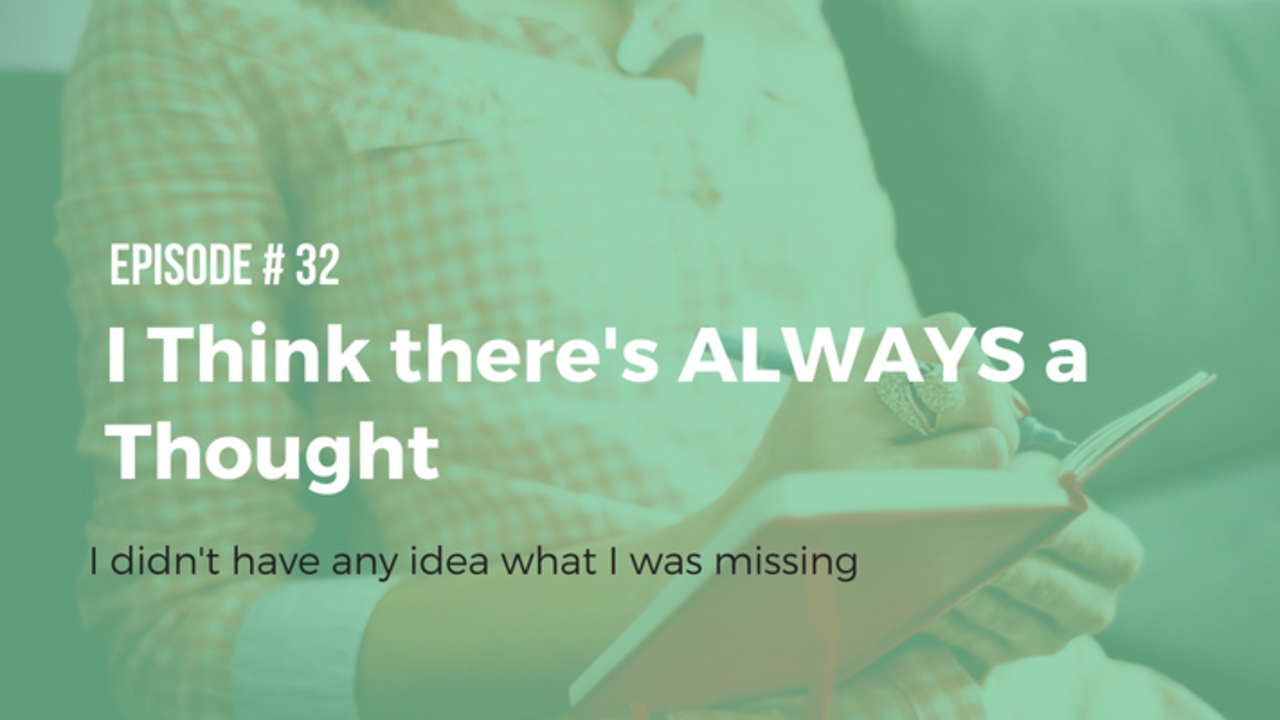 If you've heard Whitney's story of personal growth, weight-loss, and mastering her cravings, you've heard her say, "I tried every solution I could think of, but it wasn't until I changed my thoughts that I found success." - Quick side note, if you HAVEN'T heard her story, WHAAAAAT???  You'll want to do something about that immediately.

Whitney talks like this a lot ..."Thought-Work", 'Managing my mind", "My mind management tools" - but what the heck does that mean?  Or as my Algebra teacher Mr. Jenkins used to say, "Could you be more vague?"

The reality is that this is a breakthrough concept that changes the way you experience the world, your life, relationships, and any obstacles that come your way.  The idea is simple - we all think stuff and we mistake our thoughts for facts.  Thought work is a process you can use to check in on those thoughts, recognize that they are, in fact JUST thoughts, then act accordingly.  Maybe you hold on to them,...

If this resonate with you, then schedule a complimentary session.

Learn more about what it means to live in freedom.

Ask Steadfast: Goals - How to decrease pressure while maintaining motivation Mar 03, 2021
Stop Thinking POORLY About You Feb 23, 2021
Ask Steadfast - How to balance self worth and your worth in Christ - also how is Jake so funny? Feb 20, 2021
Close